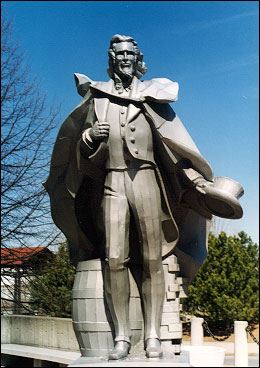 Rensselaer County's history is a mirror image of American history. Within our borders, the Battle of Bennington was fought, Anti-Rent Wars began, and the Industrial Revolution was born.

Prior to the arrival of the Dutch in the early 1600's Rensselaer County had been occupied for thousands of years by Indians. Although there are no remains of their villages, or battlegrounds, many "Indian Heads" have been found along the streams running through the high grounds in the County. The only site left from these times is the Knickerbacker Mansion in Schaghticoke. In 1676, Governor Andros and the Chiefs of the Mohicans and Schaghticoke Tribes met here to sign treaties and plant trees marking the end of King Philips War. While the trees are no longer living, the Mansion still stands.

In 1629, Kilean Van Rensselaer established the feudal manor of Rensselaerwyck. The portion in Rensselaer County was 24 miles long and ran along the Hudson River to include what is now known as Schodack, Nassau, North and East Greenbush, Sand Lake, Grafton, Brunswick, Petersburg, Berlin, Stephentown, Pittstown, Troy and Rensselaer. Fort Crailo, located in the City of Rensselaer, was the early Manor house, and is the site where "Yankee Doodle" was composed.

Rensselaer County was situated in the mainstream of events during the 1777 Revolutionary War campaign. The famous Battle of Bennington actually took place in Walloomsac, in the Town of Hoosick. During this battle, almost the entire German force, sent there on order of British General Burgoyne, was captured or killed, thus diminishing British strength and paving the way for the British surrender at Saratoga.

Following the War for Independence, New Englanders began to migrate and settle in Rensselaer County, which was founded in 1791 and named after its first patron, Kilean Van Rensselaer. Two years later, Troy was designated as the county seat.

Born in 1766, "Uncle Sam" Wilson was the seventh son of a family of thirteen. He and his brother walked from their home in Mason, New Hampshire to Troy in 1789. Previous to coming to Troy, Mr. Wilson served in the Army as a service boy whose duties were to tend livestock, repair fences, etc.

In Troy he prospered as a meat packer and slaughtered much of the beef and pork consumed here. Among the contractors supplying the Army of the North with provisions during the War of 1812, was Elbert Anderson, who on October 1st of that year advertised in the Troy and Albany newspapers for proposals for "Two thousand barrels of prime pork and three hundred barrels of prime beef," to be delivered to him at Waterford, Troy, Albany and New York City in early 1813.

Ebenezer and Samuel Wilson, who were then extensively engaged in slaughtering cattle in the village, contracted to furnish him a quantity of beef "packed in full-bound barrels of white oak."

From time to time they delivered it to the camp at Greenbush, where the soldiers from Troy designated it as "Uncle Sam's" implying that it was furnished by Samuel Wilson, who they and other people of the village were accustomed to call "Uncle Sam." The other recruits, thinking that the term was applied to the letters U.S. stamped upon the barrels by government inspectors of beef, began using the appellation "Uncle Sam" figuratively for the United States.

While in Troy, Mr. Wilson owned the land which is now Prospect Park. On this land, his animals grazed and there he obtained the clay which he used in making brick. Not only did Mr. Wilson raise, slaughter, pack beef and manufacture brick, but he also ran an orchard, nursery, distillery, general store and operated sloops on the Orange (now Hudson) River.

As for his physical appearance, he was large, well-proportioned and clean shaven. The chin whiskers were added by a contemporary artist because of their era of popularity.

In 1962, the U.S. Congress officially recognized Troy as the home of Uncle Sam. In May of 1988, the governor signed legislation marking Wilson's birthday, September 13th as Uncle Sam Day.

A bronze tablet in Oakwood Cemetery marks the final resting place of "Uncle Sam." Over this peaceful scene fly the stars and stripes maintained by the "Uncle Sam" Council, Boy Scouts of America, Troy, NY.

During the years from 1839 to 1850, tenant farmers of the patroon began to contest the right of patrons to maintain a feudal-like manor and began to revolt To avoid recognition and retaliation, the members of this grassroots organization wore calico disguises resembling Indians. When the Sheriff came on behalf of the Van Rensselaer heirs, the tenants refused to let him or his deputies onto their farms. The protest soon spread to a ten county area. In 1850, new laws favoring the tenants over the patrons were enacted, putting an end to the bloodshed. The house of the leader of the Anti-Rent Wars, Dr. Smith Boughton still stands in Alps in the Town of Nassau.

Because of the ideal geographic location of Rensselaer County and the abundant water supply available, the area became a fast leader in the industrial development of the Northeast. During the mid-1900's, the City of Troy became known for its clothing products - collars, cuffs and shirts. The nickname, "The Collar City" still is heard today. Troy also became famous for its foundry products, such as stoves, sheet iron and steel, and the precision instruments made by W and L.E. Gurley (now known as Teledyne-Gurley).

Rensselaer County played a crucial role in the Civil War, providing the Union Army with machine made horseshoes made at the Burden Iron Works, which was powered by the largest waterwheel in the world. At this plant, 360 horseshoes could be made per minute, as opposed to one manmade shoe produced each minute.

Iron plates for the Monitor, the iron clad vessel that was instrumental in the eventual victory of the Union Army over the Confederates, were rolled at the Albany Rolling and Slitting Mill.

In 1865, the first steel plant in the United States was built at the mouth of the Wynantskill in Troy. In addition, Walter Singer, inventor of the famous sewing machine was born in Johnsonville, and Walter Wood from Hoosick Falls was instrumental in developing the manufacturing of harvesting equipment.

Many of these old industries are gone, but they have been replaced by others who have come to rely on the highly skilled workforce available in Rensselaer County. Today, Rensselaer County is becoming a fast leader in high technology, playing home to the Rensselaer Technology Park in the Town of North Greenbush.